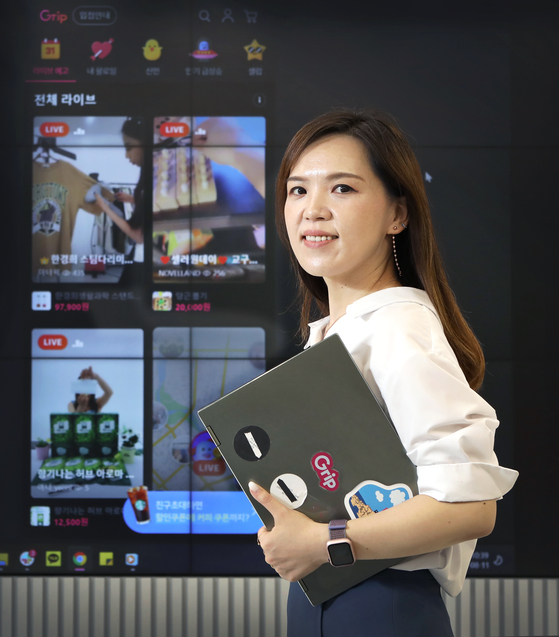 Hanna Kim, CEO and founder of live commerce app Grip, poses for a photo at the company’s office in Pangyo, Gyeonggi, on August 11 before an interview with Korea JoongAng Daily. [PARK SANG-MOON]

On screen, a woman wearing a T-shirt with a photorealistic green grape graphic picks a grape from a vine in her greenhouse, eats it and describes how it tastes.

“I got the idea for the app after watching a TV show where a reporter was visiting the country and meeting up with an elderly couple in their 70s,” said Hanna Kim, CEO and founder of Grip, during an interview with Korea JoongAng Daily at their office in Pangyo, Gyeonngi on August 11.

Grip was founded in 2019 and its philosophy is based on connections. Users can download the app from Apple’s App Store or Google Play. After authenticating their accounts through a process that verifies their mobile phone number, they are free to click into live streams hosted by sellers, also known as grippers, who must also go through an authentication process before proceeding with the sale can start the app.

When they find a seller they like, they can follow them, and based on that data and purchase history, Grip recommends similar grippers. Users can ask questions and interact with the seller and talk to other people who are logged in. Payments are processed through NICE pay, which accepts credit cards and a variety of other methods.

Grip makes a commission on every transaction.

Prior to founding Grip, Kim worked in marketing at Naver for seven years. During her time at the company, she worked as a team leader on the beauty and makeup camera app SNOW and the live streaming app Gem Quiz. During her time at Naver, she witnessed firsthand the rapid growth of video services.

“I knew video and commerce would combine,” she said. “Commerce is such a big part of our lives. People spend almost every moment – whether on water, food or clothing – trade is our life. But I didn’t want to create a trading platform. My goal was to find something that people would spend a lot of time on.”

Kim made a rough sketch of her idea of ​​the app and took it to her design team. She then started sending out hundreds of emails trying to recruit salespeople for the app. When Grip launched it had 49 vendors and one live show per day.

Kim recalled the first product ever sold through the app — vegan tofu bread.

“We sold 140 that first day, but it was mostly friends and family who made purchases to support us,” she laughed.

The Covid pandemic played a big part in Grip’s success.

“When we started in 2019, Covid had not yet struck. For almost 10 months our index number was very low because awareness was so low. We grew, but it was very slow. It all started when everything was shut down in Daegu,” she recalled. “There is a very famous fashion street in town and one or two of the stores have registered to use Grip. One of the shopkeepers went on a livestream and she cried, ‘No one comes to my shop, I can’t sell my product. I can’t pay the rent. Please buy something.” After two months, this lady on Grip was doing really well and the rest of the shops on that street followed suit.”

Grip started in 2019 with 15 employees. That number has grown to 130. The company forecasts that the app will have 5.3 million downloads by the end of the year and that gross merchandise value will be $70 million in 2022.

Late last year, Kakao invested $153 million in Grip for a 48% stake in the company.

“Actually, a few big-name IT companies were interested in the app and wanted to merge in the early stages, but we were very small and they didn’t offer much either, so I said ‘no,'” Kim said.

“Brian, the founder of Kakao, was interested in our vision, so I explained that Grip is a community-based trading platform, not just a trading platform,” she said, using the English-language name Kim Beom-soo. “Brian thought it sounded like a fun concept and said he wanted to offer something fun to Kakao customers.”

Grip’s next step is a US website in September. The concept remains the same, but the Grippers’ live streams from Seoul will be hosting their shows in English. Kim said she wanted a challenge.

“People have said ‘why don’t you start with the Southeast Asian market first, it will be easier’, and maybe it would be easier to get customers initially, but I think in the long run it’s harder to make money there,” said Kim.

“America is also so diverse in terms of content. I want to connect a man in Texas selling his cowboy boots to a person in California.”

While Grip is Korea’s first live streaming commerce app, other big names in the tech world have taken a chance on live online shopping.

TikTok had been trialling live shopping in the UK since late last year, but the Financial Times reported last month that the company is rolling back its live commerce plans in Europe and the US after early efforts met with little success.

“I don’t know why it didn’t work out for her. I know it will take some time for Grip to create awareness. It also took some time in Korea because we need to educate people about why it’s valuable. I believe I can provide valuable content – the content is both the products and the experience. I want to bring a new experience to the US audience.

“I don’t know how long it will be, but one day I want to be able to connect the world so a young man in Africa can sell his traditional, handcrafted crafts to the same man who sells his cowboy boots in Texas.”